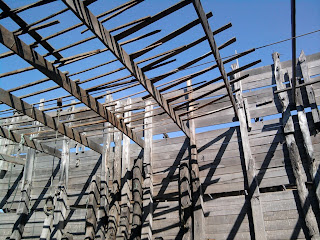 | interiors of torn down boat |
picture taken by me

We had been to a boat constructing site on the shores of Arabian sea, outskirts of Mandvi Village, Rajasthan.


Out of the group of 12 people, 10 of us were architects and were very excited about these humongous wooden boats - our heads were just 3-4 feet above the keel!!!
And the most amazing part was all the boats within our eye-sight were under construction or under demolition. We were able to see all the nuts and bolts with the skeleton of these mobile, floating structures. 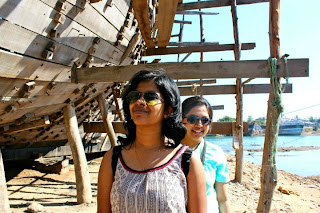 | anju & me - for proportions |
picture taken by priya k.


Coming back to the original essence of this post -  We girls weren't allowed to climb one boat which was under construction! Near one boat, we were haggling with these group of men to give us permission to see the interior. But the first 'reason' they gave was - its too dangerous to loiter around. We explained about our nature of work and assured them that we would be careful. Oh huh! Their general and most efficient excuse wasn't going to work with us. We could see their minds working - which excuse should they come up with? Eventually, one young man in red undershirt and black pants comes up and tells us - aap ladke aa sakte hain, par ladkiya nahi! hamara rivaj hai, ladki pair rakehen gi toh ashubh ho ga!


We girls were stunned! He was basically saying that if we, girls, enter their boats while its being constructed they will have misfortune!!!! So the guys amongst us tried to mollify us and asked us to wait while they go for a detailed instructed tour! How unfair ?!?! (Well, we did see the photographs but that is no consolation, especially when you are standing just 10 feet from the boat)


My point here being - even in the age of 21st century, girls and women aren't allowed to do certain things. I was so upset about the entire thing that I decided to do some research and found that its a superstition followed not just in India but all over the world.


The traditional view for centuries was that women had no place at sea. They weren't strong enough either physically or emotionally. Men would be distracted and led to vice. Many people thought that to have a woman on board would bring bad luck to a ship. A terrible storm was bound to destroy the vessel and everyone on it. This was ancient superstition and deeply ingrained amongst sailors as truth. In Suzanne Stark's book 'Female Tars' she tells of an example in the middle ages when sailors gave in to this fear with horrible consequences. At the height of a storm off the coast of  Cornwall, panicking men in a fleet of ships began to throw their female passengers to the sea. Over sixty women were drowned in this way in the hope of appeasing the storm and saving themselves. It failed to work and the majority of men, including their commander, Sir John Arundel, died.


But at the same time, in later years the only woman happily accepted on board by many sailors was the ship's figurehead. These wooden figures in the bow of the ship have traditionally been used for luck for many centuries and were made to embody the spirit of the ship. They were carved into many designs, mainly mythological creatures. From the 1770’s human figures became more frequently used, particularly women. Despite being viewed as unlucky aboard a ship, women were perversely believed to be the best navigators. Superstition amongst sailors said that the female figurehead should have eyes to find a way through the seas when lost, whilst her bare breast would shame a stormy sea into calm.


Ah well! The hypocrisies of humans!
*From my childhood days I have heard certain things can't be done by girls & women. (Thankfully my parents & grandmother never believed in these things). These 'reasons' are most times veiled excuses - generally having their roots in 'superstitions' .
Posted by a believer at 20:35 No comments:

What is the image that forms in your mind when you read this sentence? Two youngsters on a bed with a quilt around them? I would have formed that image as well – until a couple of days back. But now, the picture comes to mind is a very different one. 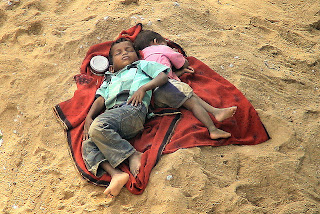 *This image made realize I should never take anything for granted – this image is not clicked my site but downloaded from net. I didn’t have the heart to click those two kids who were sleeping peacefully while their parents were busy making sure they get their next meal!
** I can’t stop child labor in my country but I make sure that it is not practiced on any of my sites.

a believer
Hi, I am Payal Patel. Trained and practicing as an architect, my school of thought is reliant on schooling my thought - thoroughly, regularly. The combination of my love for photography (https://www.phpweblogue.com/) with an insatiably curiosity about human nature makes a blog a rewarding hobby for me. Feel free to ask any questions you may have .. about me obviously!